“We haven’t had good experiences with workshops.” I was unsettled when I heard this. I’d just suggested to this person — an executive in a large company, and a possible client — that a workshop would be the most effective way for his team to overcome their most pressing challenge. Now he was saying he didn’t buy it… literally. He continued: “Workshops mostly mean getting out of the office and having bagels. People get excited for a couple of days, and then nothing happens.”

The words landed like two bricks. What could be less appealing to an executive than spending money for his or her people to take off work, get riled up, and then… nothing? My friend was saying that what I was proposing was, at best, a distraction.

Given the way many workshops are run, he’d be right. It’s undeniable that a special energy emerges when people leave their routines to focus on a specific problem for a couple of days. I’ve seen teams be incredibly engaged and creative in these contexts many times. But then what? What happens when they’re back in their cubicles? They return to the same patterns that led to needing the workshop to begin with.

There must be a way to build on the momentum generated during workshops so that “nothing happens” becomes “everything changed”. It turns out there is a way to do this, and it’s based on a solid framework that’s been around for a long time.

To understand why many workshops fail, we need to step back to see how things change over time. In the modern West, we understand change as a sequence of unique events that build on what has come before, always moving forward: First one thing happens, then another, then another, and so on.

But this is not the only way to understand how things change. There is an ancient perspective that posits change as a series of phase shifts. In this view, what’s happening at any given moment reflects a particular energy or focus. Eventually, this focus shifts into another phase, which eventually shifts to another, and so on. Think of this famous passage from the Book of Ecclesiastes:

The message is clear: There is a right time for everything, and you can’t force things. Effectiveness requires that you perceive clearly what the time asks of you.

In the East, this idea is expressed as a cycle. For example, the Buddhist tradition suggests that the focus of things shifts over time, and eventually circles back to where things started.

At Futuredraft, we’ve discovered that this cycle explains the process through which value is created (or fails to be created!) in organizations. Companies and teams are always moving through one of four phases at any given time. Those phases are:

This is the realm of ideas, concepts, and models. For example, the team or organization may be exploring a novel approach that gives them an edge. In this phase, this approach is manifested as a vision. It is an abstraction, not yet ready for testing in the real world. 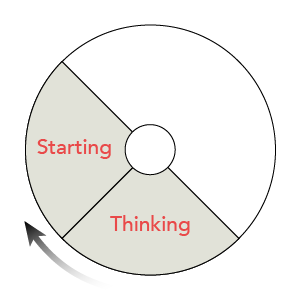 This is the realm where the vision is first put into practice. The team calls on developers. They break out agile frameworks. Code flies. A prototype is built and tested in the market.

This is the realm of operations, scale, and refinement. The team sands the rough edges off, and moves from prototype to production. The focus of this phase is on implementing systems and procedures that lead to long-term viability.

The team has learned many valuable things as they’ve gone through the process. In this realm, they’re called to share what they’ve learned with the broader organization — and often, with society as a whole. This phase focuses on sharing the knowledge so others can benefit from it.

You may assume this is where the story ends. But as you know, market conditions are always changing. If the team, organization, or product, is to thrive in the long term, it must evolve to respond to the context it’s operating in. This requires that they move on from the Sharing phase back to where they started: to the Thinking phase, where they have the opportunity to reevaluate their broader context—and what they’re doing within it—given their newfound knowledge.

Many of the problems we see in organizations happen because teams become stuck in one of the phases. It may be that folks have hit upon a particular system that is working well, and they’re now coasting on autopilot. Or perhaps the group is biased towards discussing concepts and models, and are having a hard time executing. Whichever the case, moving through all phases — and cycling back to the beginning — is important for healthy progress.

At this point, you may be wondering: What does this have to do with workshops? Well, for a workshop to have meaningful long-term impact, it must address the phase the team is currently working within, and whether or not it is healthy for them to continue doing so. For example, if a team is stuck creating concepts and visions, it must be nudged to take action. Alternatively, the team may need to stay in a particular phase for a bit longer; team members may be anxious to take action without having yet mastered the conceptual aspects of the project. In these cases, they should be encouraged to dig deeper by staying in that particular phase longer.

It’s important to note that moving on from a particular phase — or delving deeper into the current one — is seldom the explicit objective of a workshop. Most workshops have other goals in mind: Mapping out a supply chain, understanding how users interact with a service, visualizing an ecosystem, etc. Addressing the team’s stage in the cycle is an implicit — and often, unspoken — goal. Workshop leaders and facilitators must set up the conditions necessary to support the team’s progress around the cycle, even though that may not be the workshop’s overt goal.

Of course, doing this is easier said than done. For one thing, it’s difficult for people immersed in these situations to take a step back to clearly see what is really happening. For another, individuals, too, are subject to these phase shifts. People are often not aligned with each other; one person in the team may be in the Thinking phase, while another is stuck in the Doing phase. Getting unstuck requires alignment so that the team can progress as a whole.

And with this framework in place, progress comes naturally. As people start seeing results, they re-engage with each other and their joint mission. This generates a tremendous amount of energy and creativity. A team that can move through the phases in sequence generates a momentum that makes it unstoppable. But this can’t be done in cubicles during 9-to-5 office hours; it requires that people step out of their daily routines, and focus their joint efforts towards a common direction, one that keeps them evolving. The best means I’ve seen for doing this is workshops — if done right.

Here are a few tips to help you lead and facilitate truly effective workshops:

This post originally appeared in Drafts, a Futuredraft publication.