“We should discuss LEGO,” said the Slack message, “because your piece is both right and wrong.” The sender was my friend Yoni Knoll, who knows LEGO better than I do. The piece he was referring to was my earlier post about LEGO as an illustration of a well-known modular framework.

In that post, I said the LEGO system is based on rectangular prisms of regular dimensions and that the more a particular piece diverges from this form, the less useful it is. Yoni took exception with this statement, leading to an interesting discussion. A couple of important points came up that I want to highlight here.

The first is that saying a piece is “less useful” than others is inaccurate. Useful for what? There are many LEGO pieces that are much less popular than the 2×4 brick I highlighted in the post, but which are incredibly useful for building things with the system. For example, Yoni mentioned the pincher: 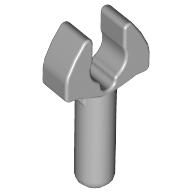 I’ve built elaborate sets with this piece ​and can testify to its usefulness. The pincher enables structures that would otherwise be difficult or impossible using only studs.

To clarify: when I said the 2×4 brick is the most useful, I was referring to usefulness on two levels: 1) as a physical component within the system, and 2) as representative of the system. I stand by my assessment of the simple brick as the most useful for 2), but clearly 1) is debatable. Pieces like the pincher are very useful from a practical perspective, if for no other reason that they open new possibilities for the system.

This leads to the second point I wanted to highlight: LEGO is not just a great illustration of a modular framework; it’s also a great illustration of a modular framework that is evolving. My characterization of LEGO in the earlier post was mostly informed by my first-hand experiences playing with it—many decades ago. LEGO has changed a lot since then. As Yoni put it, “the more important evolution is from stud-center to connector-centric. In that way, it has become a more powerful and expressive framework.” Again, the pincher is a good example of this: while it’s not stud-centric (it doesn’t even have a stud), it’s an exemplary citizen of today’s LEGO system — if you understand the system to be connector-centric (a broader framing) rather than stud-centric.

In retrospect, I shouldn’t have used the word useful in my original post. Perhaps a better term would’ve been essential, as in “the 2×4 brick represents the essence of the LEGO system.” This shifts the focus from function to significance, which was the main point I wanted to get across.

I’m grateful to Yoni for pointing out my error and helping me understand the evolution of the LEGO system. Clearly,​ there’s much to play with here.